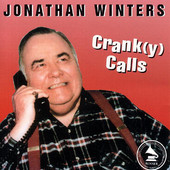 As indicated by the title, “Final Approach” was Jonathan Winters’ final comedy album.  Born November 11, 1925, Jonathan Harshman Winters III   was an American comedian, actor, author, and artist.  Beginning in 1960, Winters recorded many classic comedy albums for the Verve Records label. He also had records released every decade for over 50 years, receiving 11 nominations for Grammy Award for Best Comedy Album during his career and winning a Grammy Award for Best Album for Children for his contribution to an adaptation of The Little Prince in 1976 and the Grammy Award for Best Spoken Comedy Album for Crank(y) Calls in 1996.

A pioneer of improvisational stand-up comedy with a gift for mimicry, impersonations, various personalities, and a seemingly bottomless reservoir of creative energy, Winters was one of the first celebrities to go public with a personal mental illness issue and felt stigmatized as a result.   According to Jack Paar, “If you were to ask me the funniest 25 people I’ve ever known, I’d say, ‘Here they are—Jonathan Winters.’” He also said of Winters, “Pound for pound, the funniest man alive.”

In 1991 Winters earned an Emmy Award for his supporting role in Davis Rules. In 1999 Winters was awarded the Mark Twain Prize for American Humor. In 2002 he earned an Emmy nomination as a guest star in a comedy series for Life With Bonnie. In 2008 Winters was presented with a Pioneer TV Land Award by Robin Williams.  Winters also spent time painting and presenting his artwork, including silkscreens and sketches, in many gallery shows. Additionally, he authored several books. His book of short stories, titled Winters’ Tales (1988), made the bestseller lists.