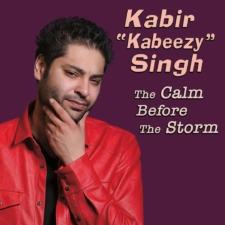 Kabir “Kabeezy” Singh “The Calm Before the Storm”

Kabir “Kabeezy” Singh is one of the fastest rising comedians in the nation. A high-energy, crowd-pleasing comic with an in-your-face attitude and razor-sharp wit, he is performing to sold-out crowds not only across the US, but internationally.  Kabir has won numerous comedy competitions.  He recently took 2nd place in the World Series of Comedy beating out 500 Comedians from all over the country.  He took first place two years in a row at the Bay Area Stand Up Comedy Competition. Even more impressive, he was crowned the winner of the 2014 San Francisco International Comedy Competition by coming in first place in all 5 shows in the final round!  This is a feat that had never happened in the rich 39-year history of the contest, which has included past competitors like Dana Carvey, Robin Williams, Ellen Degeneres, Louis CK, Patton Oswalt, Marc Maron, Doug Stanhope, and Dane Cook.  Kabir has shared the stage with top comedy stars like Dave Chappelle, Jo Koy, and Russell Peters. His “Comedy Central” Debut was on the hit comedy show “Gabriel Iglesias’s Stand-Up Revolution”, and he has been on the popular TV show Family Guy. Currently, he is touring with Anjelah Johnson and headlining the 2019 Outsourced Comedy Tour starring Neel Nanda, Sammy Obeid and DJ Sandhu among others.

Singh recently performed at the grand opening of Jimmy Kimmel’s new Comedy Club in Las Vegas.  He headlines at every major comedy club in California including the Hollywood Laugh Factory, Melrose Improv, San Jose Improv, Brea Improv, Irvine Improv, The Comedy Store, Cobbs Comedy Club and the San Francisco Punchline. Kabir’s stand-up comedy has also been televised nationally on the Starz Network and internationally on the BBC Network, TV Asia, and ZEE TV. Kabir’s fan base has grown year after year and his reputation as a crowd-pleasing comedian is well known in comedy circles. Kabir Singh is truly a must-see talent.