Tyler Boeh’s comedy has been described as high-energy, intelligent, physical, and silly with a balance of west coast charm and east coast attitude. His quick wit and celebrated “beatboxing” bring audiences to hysterical heights. His fresh comedy style exposes his life as a bus-riding urbanite with friends that are way too into hip-hop. He tries hard to be hip, but just can’t get it right. He is still suffering from an inability to defend himself as a child: “You remember the 98 pound weakling when you were a kid? Well that’s the guy that used to kick my butt.” But a childhood as an underdog with a lazy eye has been perfect fodder for his comedy.

Tyler started performing stand-up in Portland, OR after achieving success as a nationally recognized vocal percussionist in a college acapella group. Just a few short months into his comedy career, his fast paced, shotgun delivery took him right to the top!  Now, almost 10 years later, Boeh has won or placed in dozens of comedy competitions, including Seattle, Boston, San Francisco and recently The World Series of Comedy.  He has been featured on NESN’s Comedy All-Stars, Comcast Comedy Spotlight, and The Comedytime Network. He has appeared multiple times on Laughs on the Fox Television Network, and most recently he held his own with Craig Fergusson on his new show, Celebrity Name Game.  His stand-up CD, Carpool Companion, is a favorite on Sirius-XM Radio and Pandora and was named the Best Comedy Album of 2012 by LaughSpin Magazine and Under The Gun Review (ahead of Louis CK). 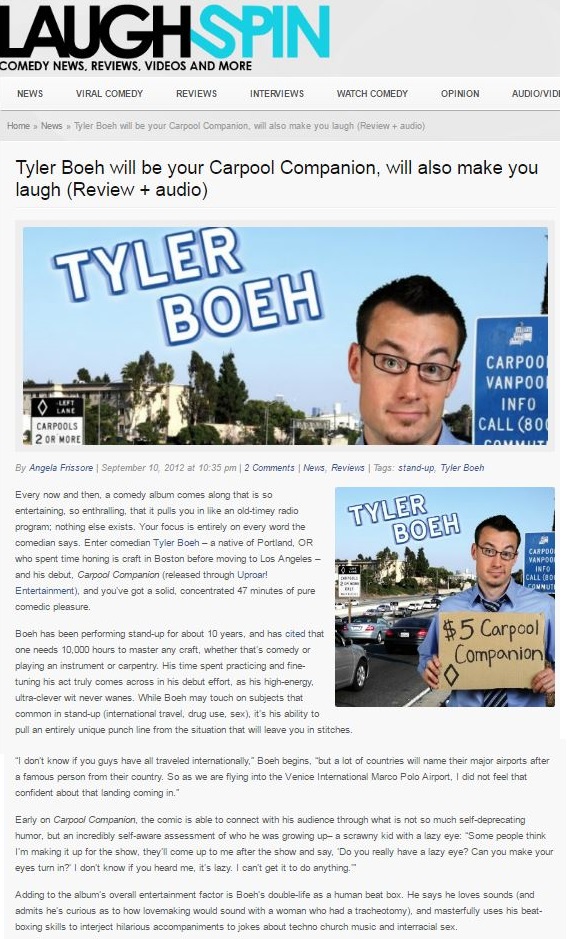 Tyler was once featured in an article in Horizon Air Magazine about how comedians don’t have to move away from the North West to have a successful career in comedy. By the time the article was published, he had already moved away… to Boston… where he quickly became a favorite on the Boston scene. He subsequently moved to Los Angeles where he continued to refine and perfect his stand-up as well as to hone his talents in improv and writing. Within a year of his move to Hollywood he had established himself at the top comedy clubs and completed work on two television pilots. Tyler Boeh is comfortable, confident, and hilarious.  He is a treat not to be missed!  He performs across the country in colleges, clubs, and theaters.  Don’t miss an opportunity to see him live, but treat yourself every day to his incredible comedy styling by listening to his debut CD Carpool Companion.  It is sure to become a comedy classic. 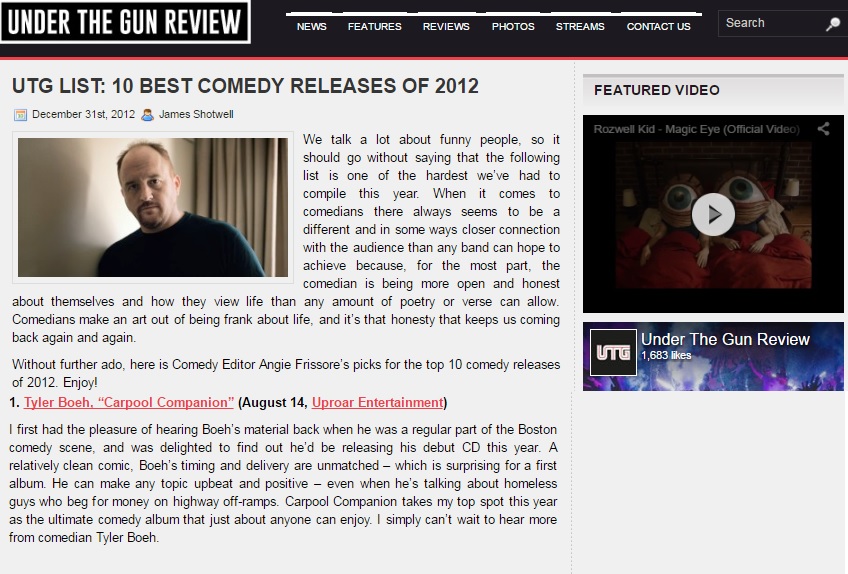